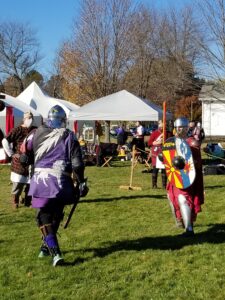 The tournament to determine the heirs of the East is well on its way, and 9 combatant consort pairs remain. The tournament will be run as a double elimination tournament through the semi-finals. Please see the bottom of this post for the full format.

The Gazette thanks our reporters on the ground, the MoLs, heralds, Earl Marshal Staff, and their Majesties for their hard work. Any mistakes are entirely on our part, and not theirs.