Current Eastern King’s Bard and Companion of the Order of the Laurel, Grim the Skald has issued the following challenge to the rapier fighters of the known world. He is challenging any and all rapier fighters to face him on the battlefield and so become part of an epic poem that he will write about the experience, the fighters, and the practice of fencing in general.

Complete details including upcoming events where you can expect to find Grim can be found on the East Kingdom Wiki page for his challenge.   END_OF_DOCUMENT_TOKEN_TO_BE_REPLACED

END_OF_DOCUMENT_TOKEN_TO_BE_REPLACED

Andy Keleman, a commercial director based out of Pittsburgh, created the following commercial for the SCA as his entry in a competition sponsored by Diners Club.  He answered questions for the Gazette about creating the commercial and his work.

How did you first learn about the SCA?

I had worked with the SCA back in 2009 using the Pittsburgh chapter as the subject of a piece I produced for WQED, Pittsburgh’s PBS station, just documenting who they are and what they do. A lot of people see practice occurring at various points around the city, but have no idea there’s a whole organization that’s worldwide behind what they see as just people in Medieval garb fighting with swords. So we set out to really show the people behind the organization and go deeper into what the SCA does.  END_OF_DOCUMENT_TOKEN_TO_BE_REPLACED

END_OF_DOCUMENT_TOKEN_TO_BE_REPLACED 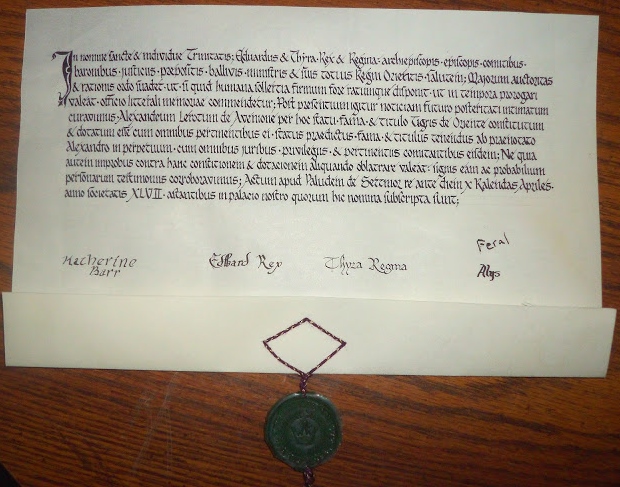 Greetings, all! Summer’s upon us, and Pennsic’s just around the corner! (I know, I know… I hear the scratching of pens on paper and the whoosh of brushes too… *grin*) Once again, the East Kingdom Scribes Tea will be held at the East Kingdom Royal Camp, thanks to the generosity of Their Majesties Gregor and …

END_OF_DOCUMENT_TOKEN_TO_BE_REPLACED

The event announcement for Bhakail investiture has been updated to include new parking info. If you are attending the event, please check it out here.

The following was shared on the SCA official facebook page. The Gazette will post more information when it is available. Okay, so we piqued your interest and you clearly want more! Coming in July and August, we’re going to host a digital talent search! If you’re a performer or group of performers in the fields …

At this year’s Pennsic War, the big-hearted people of the East Kingdom will have yet another opportunity to demonstrate the greatness of our Kingdom. At the suggestion of the Queens of the East and Middle Kingdoms, a new war point for volunteering is being instituted.  For the 24-hour period spanning Tuesday, July 30th (the Tuesday of …

END_OF_DOCUMENT_TOKEN_TO_BE_REPLACED

The Shire of Nordenhal is hosting auction fundraiser from now until Midnight June 30th. Every item is hand crafted and donated by local Shire members. Please take a look, you may find the perfect gift! All of the instructions for bidding are on the main site. Thanks, Ysemay Sterlyng

This be the history of the feud that took place between the Crafty Baron Fergus MacRae of Carolingia, called by some “Guiscard”, and Nest verch Tangwistel, the  Baroness of Smoking Rocks, called by some “The Sainted”. May the Arbiter of the  Universe whose hand moves the quill that pens the life of men be my judge if this is not a True and Just accounting.

In Ano Societa XXXXVII in the late winter outriders of the Baron Fergus were noted  and seen moving among the northern towns of Smoking Rocks. Often disguised as Merchants they had traveled thru the northernmost marches of the peaceful villages and demesnes of Smoking rocks seeking weakness and to sow turmoil. END_OF_DOCUMENT_TOKEN_TO_BE_REPLACED

END_OF_DOCUMENT_TOKEN_TO_BE_REPLACED

Greetings unto the East! The mail-in pre-registration deadline for Bhakail Baronial Investiture on Saturday, June 29th has been extended through the weekend. Baroness Philadelphia Brown will still be accepting feast reservations on a first-come, first-served basis, but you must hurry as feast only has a very limited number of seats available.  That’s right folks, feast is …