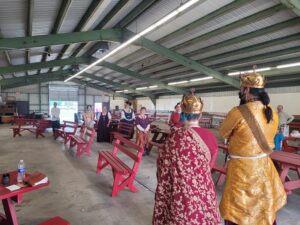 At the War of the Roses, it was time for The East Kingdom Consort’s Bard, THL Agnes Marie de Calais and the Sovereign’s Bard, David Anthony, to step down, and for their Majesties to chose new Bards.

The Theme of the Bardic Championship was “The Mythology of War”