Good gentles of the East,

This weekend, our reenactment group lost a beloved gentleman, Lord Perley of Malagentia, who passed away on May 13, 2022. He leaves behind his wife, Lady Mary of the High Hills, five children, many grandchildren and great-grandchildren, and countless friends. Perley Emery was generally quiet –though his wit was sharp– and known for his easy-going manner and friendly smile. 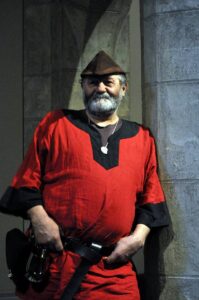 News of his passing prompted many memories. Those who knew him appreciatively remembered his infectious laugh, fine Maine accent, and that he was a good listener who, when asking how you are, wanted to actually know the answer. Perley was described as interesting, resourceful, eager to help, and selfless, all qualities he demonstrated regularly.

He served the Riding of Ravensbridge as Knight Marshal and Archery Marshal, event steward, and frequent kitchener. He was a hard worker who was generous with his time and talent. If you needed it moved, he’d move it. Need it lifted, he’d lift it. Tote the barge? Lift the bale? Perley was happy to take care of it. The quiet, steady generosity of Perley and those like him is what sustains this organization and the people in it.

Perley was about 50 years old when he found the SCA, having followed Lady Mary to Pennsic at her invitation. “He survived that first Pennsic by becoming an archery marshal,” she said, “and by creating the never-forgotten Perley Quest, which was a series of epic provisioning trips to Butler and beyond, with both willing and unwilling guests riding shotgun.

He was immediately taken by it and became a heavy list fighter. Fighting became a passion, and he frequently fought whenever he could – in practices, melee battles, the Birka Bear Pit, the East Kingdom Crown Tournament, and the Pennsic Greybeard Tournament for fighters between ages 51 and 70. Lady Rose Cooper Steele of Ravensbridge, shared,  “My 20-something nieces and their friend and I were his gallery, and we’d be swooning over him calling, ‘Ohhhhhhhh, Perleeeeeeeeey.’ The looks he gave us! The other fighters could not stop laughing.” 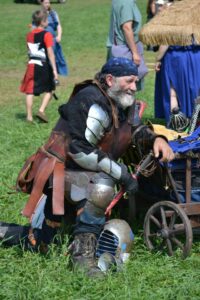 “I don’t remember what year exactly he started fighting, but I’m pretty sure it was close to 2000 and he was at or near my age at the time. Starting the SCA later in life is unusual. He had no aspirations of playing heavy list except to have fun with it. He wasn’t trying to win tournaments or become a knight. He just was having fun.” THL Griffyn Dunham recalled that he would miss Perley’s infectious smile. “It was my honor to fight alongside him over the years. The battlefield and the camp will both feel empty without him.”Easy to enter and hard to leave, Perley’s camp was a place where the spirit of hospitality reigned. In addition to a friendly smile, a kind word, and a good laugh, visitors were often met with a heavy plate of something delicious.

Perley was well known in the SCA for being “the rabbit man.” In the modern world, he was a highly respected breeder and farmer of meat and fiber rabbits. He was President of the Maine State Rabbit Breeders Association and had served in a leadership role in many others. He also managed the rabbit exhibit at Maine’s beloved Common Ground Country Fair from its inception. The meat rabbits he and Mary raised have provided fine dinners for many a Scadian encampment and feast hall.

If Perley isn’t currently sitting at the great feast, it will only be because he’s volunteered to keep the tables filled, just as he did here. He will be missed greatly and remembered fondly.

Thank you to Lady Mary of the High Hills and Lady Rose Cooper Steele for contributing to this article.