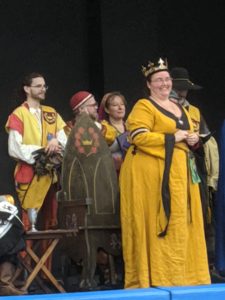 Being an account the Court of Her Majesty Queen Margarita held on November 2, A.S. LIV (2019) in the Barony of Buckland Cross at Crown and Queen’s Rapier Championship.

Gregori Rogue Montana was made a member of the Order of the Golden Rapier.
Scroll Illumination by Camille des Jardins, Calligraphy by Anna Mickel von Salm, and words by Marguerite inghen lachlain

The Cloak of Perseverance was awarded to Don Owynn Greenwood.

The Toybox was run by Master Davius St. Jacques.

Her Majesty’s Inspiration Token was presented to Phaedra de Vere.