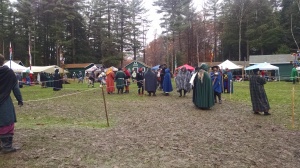 Crown Tourney has begun in the rain with over forty entrants.  This year’s Crown Tournament has seen a return to the traditional double-elimination format with the initial pairings set by challenge.  Each fighter, beginning with the fighter lowest on the Order of Precedence, was allowed to issue his or her choice of challenge.

Each bout in the double elimination was fought as a best two of three fights.  The first and second round were fought on the planned field.  The third round is starting on the nearest graveled parking lot due to the increasing mud and slickness of the fighting field.