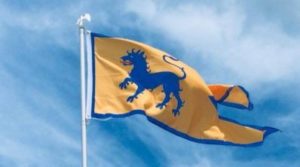 The Earl Horic Memorial Sovereign and Consort’s Championship of Arms Tournament was held in the Shire of Eisental on Saturday, June 4th. Combatants fought in a Round Robin, and the top 16 advanced into a double elimination tournament.

At the end of the day, Syr Brennan mac Fearghus stood victorious and was named the Sovereign’s Champion. In court, THL Sigvardr Halfdanarson was announced as the Consort’s Champion.