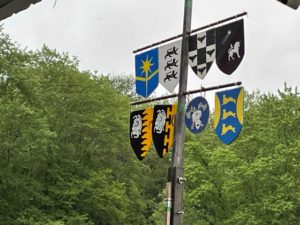 Today, the Baronies of L’Ile du Dragon Dormant and Havres des Glace will host the combatants and their consorts vying for the honor to become the heirs to the Tyger Thrones.

The list of combatants and their consorts are as follows:

The format is as follows:

Unto the populace of the East do I, your friendly neighborhood Wilhelm, send greetings!
The following is the format for crown tourney this weekend.
There will be four Round Robin buckets (hope you worked on your cardio) with the best four from each list advancing. Ties will be resolved with a 1 on 1 fight.
The Sweet Sixteen will be standard Double Elimination (double kills will be re-fought)
The Final Four will be best 2 out of 3.
The Finals will be best out of seven, matched weapon forms (the weapons themselves need not match) no previous wounds retained.
Round 1: Weapon and Madu (madu will be provided by their Majesties).
Round 2: Loser from round one picks the next weapon form and so on.
No individual combatant may pick the same form twice, however the same form may be chosen by both combatants.
If we reach round seven, it will be bring your best form.
I am going to repeat this until you hear it in your sleep. Check your armor and weapons prior to leaving for the event. Make sure your armor is in good repair and your weapons all meet parameters as everything will be inspected thoroughly. Bring tools for repairs that may happen while there as that is the worst way to be knocked out of a tourney.
Fight hard, fight honorably, and do honor unto to the one who inspires you that day.
Travel Safely,
Wilhelm
The Gazette thanks our reporters on the ground, the MoLs, heralds, Earl Marshal Staff, and their Majesties for their hard work. Any mistakes are entirely on our part, and not theirs.