On a sunny day on Lake Cochituate in the heart of Carolingia, the stage was set.  The banners of Carolingia flew across the wooded shoreline.  A wall tent stood decorated with the Arms of Carolingia and a banner stating, “Carolingia Statis Mentis Est” to the right of the dais. Before them, the new Baron and Baroness of Carolingia awaited their populace who would join them in the ethereal space called Zoom in these times. 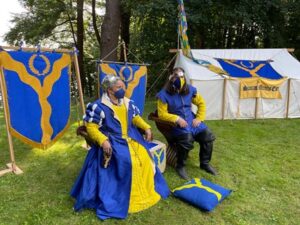 Still, before they would see their populace before them, Frithuric and Fiore would have to be invested.

The plan came together rather quickly but with intention. Carolingia would record its investiture before Emperor Ioannes and Empress Honig at Harpers Retreat. Harpers Retreat  is hosted by the Barony of Stonemarche whose magnanimous and brilliant leaders, Baron Keziah and Baroness Deirdre, saw fit to permit us a corner of their lands for the deed.

So it was that in the week preceding the recording, Fiore and Frithuric found themselves awaiting one Tabitha of Wyndmoore.  A Carolingian present at the beginning of it all, Tabitha accompanied us to Shakespeare House on the grounds of Wellesley College, with which she is still affiliated.  It was there that we obtained a small amount of soil from the site of our first event.  With this in hand, we were now ready to sanctify a bit of earth so that we could be invested on Carolingian soil even while abroad in our Cousin’s lands.

That occasion was sublime — Attended by members of the Baronages of the East Kingdom, as well as, what members of the populace of Carolingia could be there.  It was recorded beautifully through the efforts of THL Sugawara no Naeme, miLord Ogawa Ryugoro Uchiharu, and Baroness Arlyana von Wyck.  It was then edited to perfection by THL Symon of Barnesdale (patent pending). 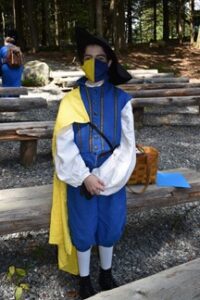 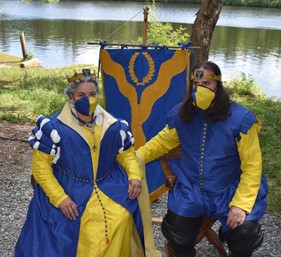 The investiture was played to the populace of Carolingia during the morning court of virtual Falling Leaves in Exile.  An event filled with games, cooking, storytelling, and a performance from i Sebastiani — The Greatest Commedia dell’Arte Troupe in the Entire World.  We hosted both games and a virtual reception to greet the newest members to the Carolingian Orders in a new format, Spatial Chat.  This format proved dynamic and much more like interacting in space.  We recommend it and will use it again.

The following is an accounting of the First Court of Frithuric and Fiore.

A trumpet fanfare sounded by Lady Matilda of Carolingia, brought us to attention.

Lord Richard then called out:

From the reflected glory of Ghiberti’s golden door

To the radiant shine of these joined gilded rivers

Their Excellencies began with the following statement:

Florence in the 16th century was an explosion of energy, of discourse, dance, music, and artistic endeavor.  But also of military prowess and martial innovation.  It was a time for scholars, thinkers, and doers.  Florence was a place of great diversity, where nobles and envoys from around the world enriched the fabric of the society at large.  Where the son of an enslaved woman could be Duke.  It was a period of feminist flex and the embracing of complexity.  We wish for Carolingia, this vibrance and this power.

Frithuric: We see our role as helping to spark energy, to provide a little focus, and to enable this Barony to do fun and amazing things.

We wish to engage this populace to do more things together.  As with the ice cream socials, we wish to create small, localized opportunities to build community (as the plague allows).  To have all of you share what is unique and special about your areas of interest with each other.  To welcome newcomers and re-engage people we have missed along the way.

We want to speak to each of you.  There should be no Carolingians we haven’t talked to, so don’t be shy – come introduce yourself. Just, not all at once.

Fiore: At the beginning of this process we asked, “What does it mean to be Carolingian?”  We got a lot of different answers and honestly, a lot of blank stares.  We want to have an answer.  We wish to help define what it means to be Carolingian using your voices.  Not a singular voice but a diverse chorus made of us all.  As a result, you may notice that Carolingia does not have one heraldic vox.  We will not have a single herald for our tenure.  We will speak with many voices for we represent all of the voices of Carolingia.

We are yours and we are excited to begin this journey with you.

Lady Elspeth of the Waytes

Her Excellency, Fiore then related the story of how we came to record our investiture by the grace of cousins, Their Excellencies of Stonemarche, at Harpers Retreat. She also related the tale of how one Tabitha of Wyndmoore, a founding member of this Barony, came to assist us in obtaining the sacred soil of Carolingia.  Their Excellencies offered deep gratitude to Tabitha of Wyndmoore for her willingness to continue to serve this Barony as she did in days of yore.

Sometime during these awards Her Excellency attempted to induct someone into a nonexistent and awfully funny order. His Excellency called out “Symon, edit that out.” At this point, the Heralds reminded His Excellency that this was a live broadcast. His Excellency said, “Doh!”

Lord Richard then announced that we had news about the scourge of previous events.  The Falling Leaves Beast.  The following footage followed:  https://drive.google.com/file/d/17vXNRIqLXZJmWODz5eXinS7OpLFLg7uJ/view?usp=sharing *This footage is restricted to EK accounts only.

His Excellency then bemoaned our lack of a Champion for Performing Arts when from the trees came a blaze of fabric as Mistress Rhonwen glyn Conwy flung her body at the feet of Their Excellencies.

It cannot be borne!  Thus do,  i Sebastiani, The Greatest Commedia dell’Arte Troupe in the Entire World, volunteer to cast themselves into this hole and become the Performing Arts Champions of Carolingia.

There was much wailing but then suddenly, joy as, by fiat, His Excellency Frithuric appointed i Sebastiani (The Greatest Commedia dell’Arte Troupe in the Entire World!) our new Champions until such a time that a competition can be enjoyed safely by all. 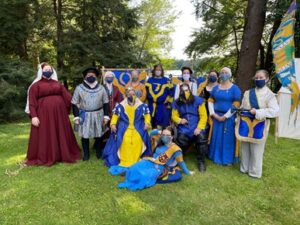 After all of that excitement, we almost forgot to announce that our Thrown Weapons Champion, Lord Bryon de Burgh would soon announce the metrics for our remote Champions competition to select his successor.

There being no further business, court was closed by Lord Richard.

This is an honest account, by my hand, Fiore, Baronessa di Carolingia