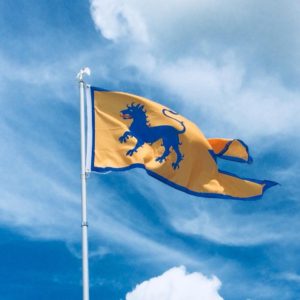 This weekend, there will be two Crown Feeder Tournaments, one in the Barony Beyond the Mountain, and one in the Shire of Quintavia, co-Sponsored by the Barony of Carolingia. The Gazette will be providing coverage of the results. The final rounds of the tournament, consisting of the top 16 fighters, will take place on July 17th in the Shire of Hartshorn-dale. Attendees are encouraged to check the event announcements for safety and schedule updates.
The Jongleur Herald, the deputy in charge of Tournament Heraldry, would like to remind combatants to bring their list shields with them, as there will be list trees at all three tournament. For more information about the size and construction of such shields, a guide is available on the EK wiki.
A missive from the Kingdom Marshal for Armored Combat:
Greetings to the populace of the East, and especially to those combatants and consorts who will be competing in the Crown Tourney feeder tournaments this Saturday, July 3rd.
Both feeder tournaments will be starting at 12:00 in the Shire of Quintavia and the Barony Beyond the Mountain. All combatants are requested to check in with the Ministers of the Lists and have their armor inspected beginning at 11:00. As a reminder, single handed weapons are required to have a lanyard.
There will not be processions before the feeder tourneys begin, but the combatants and consorts will have the Rules of the Lists read out, the format of the tourney will be read, and they will be addressed by the Royalty present.
The feeder tourneys will have the combatants present divided into two equal pools and will be fought in the round robin style. The combatants will fight one bout against every other combatant in their pool. The four combatants with the most wins in each pool will advance to the Final 16 Tourney.
The Final 16 Tourney will take place in the Shire of Hartshorn-dale on July 17th. The Final 16 Tourney will be fought in a double elimination style with the exact format of the tourney to be announced shortly.
In Service,
Sir Cedric of Armorica
Kingdom Marshal for Armored Combat