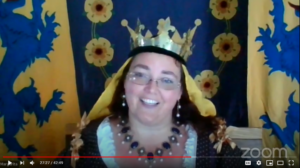 Being the Court of Her Majesty Queen Margarita held on August 9th, A.S. LV (2020) in the The Ethereal Kingdom of the East at East Kingdom Ethereal Court VIII – The Rise of Court

Unto the Scribes of the East does Malcolm Bowman, Her Majesty Margarita’s Herald, send greetings.

During this Eighth Ethereal Court, you may have observed that I improvised a number of the scrolls. Several I did, in fact, have the texts for. However, due to unforeseen circumstances (a power outage) I was unable to retrieve that information to share them during court. Further, it was unfortunately not possible for me to do a voice-over with the correct text that you worked so hard to create.

Also, a scroll or two was not shown that we did have pictures of. I’m sorry that some mistakes were made, and I take full responsibility for that.

I apologize, further, if any of my listings on this report are incomplete. I greatly and tremendously appreciate all of you, your artistry, and your continued hard work.

I believe that the East Kingdom has the best scribes in the known world – and I have always really appreciated you and the work you do.

Please accept my apologies, and know I would never wish to slight any of you. Please continue to be amazing.

Video: ‘Service is Love Made Manifest’

Eva von Köln was given the Silver Rapier, and was awarded arms
scroll by Palotzi Marti

Eon of Carolingia was given the Silver Rapier

Perez Ben Meir Gershon was given the Silver Tyger, and was awarded arms