On September 14th, the Barony of Carolingia hosted Kings and Queen’s Equestrian Champions along with a host of other activities at the traditional Falling Leaves event.

It’s common for horses to be shared if an experienced rider wishes to compete but is not able to bring their own horse due to either lack of one or distance, and someone who is bringing a horse is comfortable doing so. Thus you see the same horse listed with multiple riders.

Dakota Tesoro is an experienced competitor in his own right. Lady Cathain is the 5th rider he has carried to a Championship during his SCA career.

A total of 13 competitors entered the lists, ranging from two junior members to Peers of many years experience:

The competitions were heralded by Baroness Audrye Beneyt, who was also kind enough to provide the Gazette with the list of competitors.

The format of the competition was chosen by the outgoing champions, Duchess Kiena Stewart and Lady Leana Doucet. This year two Challenge Courses were devised to test the mettle of riders and horses. The idea of a Challenge Course is to require the horse and rider to demonstrate skill in multiple areas so that the best pair overall will go home with the victory, rather than valuing a single skill over others.

This year’s competition consisted of two challenge courses, from which a total score determined the winner of the competition. 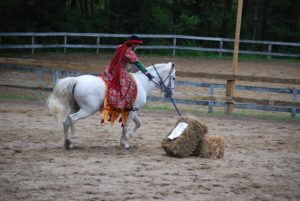 The Queen’s Champion spears the Great Board. Photo courtesy of Terry Wolejko

In the morning riders completed the Queen’s Challenge, which was filled with obstacles designed to simulate things a knight might encounter when riding out upon a quest, in this case to rescue the Queen’s missing unicorn.  Obstacles included crossing a simulated river, negotiating a maze, and spearing a boar guarding the prize.

The King’s Challenge, which followed in the afternoon, included a pass at the quintain, a period training tool to allow horse and rider to gain skill at jousting before beginning practice against a live opponent.

It also included striking a target with a spear from horseback, spearing rings with a lance, striking heads off poles with a sword, and perhaps the most challenging of all, dismounting, going around your horse and then remounting, without holding the horse in place in any way. This is the mark of a well trained steed, as it’s very common for them to get excited by the competitive spirit of the day and not want to stand still.

Points were scored for successful completion of the obstacle, such as striking all the heads or lost for failing to strike one or more. A part of the score was also based on time, so competitors need to assess their own skills and the horse’s attitude, and determine whether to try to compete at the fastest pace to save time, or go more slowly and avoid losing points for missed targets.

In other equestrian related news of the day, Their Excellencies of Carolingia inducted Duchess Katherine Stanhope and Mistress Eleanor Fitzpatrick into their Order of the Perseus for their prowess in equstrian martial activity.