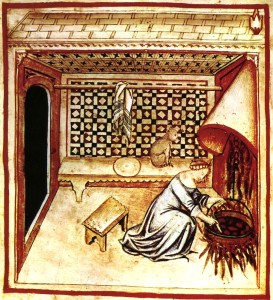 Mistress Aravis Katheryn DelClare passed away on Tuesday, November 20th following a sudden illness.
Mistress Aravis (sometimes known as “Aunty Aravis”) was one of the earliest members of what would become the Crown Province of Ostgardr, and of the East Kingdom. She was present at the Crown Tournament on July 21, AS III (1968) won by Bruce of Cloves, which marked the official separation of the East Kingdom from the West.
She was the first formally sworn esquire (of any gender) in the East Kingdom, and also served the Royal Court as Council Secretary (also known as the “Protonotary of the Curia”), Royal Scribe, and briefly served as one of the Editors of the early East Kingdom Newsletter, Pennoncel.
In September of AS V, she was inducted into the newly formed Order of the Silver Crescent, in a group that also included El of the Two Knives and Walter and Elfrida of Greenwalls. For a time, she also served as Principal of that same Order. In AS VI, she was invested by King Jehan as “Foreign Minister of the Kingdom of the East” – an office which, at the time, involved keeping the East in touch not only with the West Kingdom, but also with such far-flung lands as the Barony of Carolingia.
In AS XI, Laeghaire and Ysabeau II presented her with a Grant of Arms, and in AS XV she was recognized as a Companion of the Order of the Pelican by Aelfwine and Arastorm.
A longtime supporter, and later resident, of the Barony of Dragonship Haven, she was one of the first two people inducted into the Baronial Service Order, the Oar (now called the Order of the Keel) when it was founded in July of AS XXI. This award is given to service to the Barony by people who live outside the Barony. Then, in November of AS XXVII, she was made a companion of the order of the Yale, given for service to the Barony by members of the Barony.
She was heavily involved with the Stratford (CT) Cat Project, and a longtime member of the Bohemia Historical Society on Long Island. She was an avid reader and fan of science Fiction and Fantasy, as well as of cozy Mysteries and period-piece movies and television shows, as well an aficionado of antique shows and auctions and library sales. In her modern life, she was, until her retirement, a copy editor for one of the highest-circulation print publications in the United States.
No memorial information is available at this time, but donations can be made in her mundane name, Mary C. Radich, to Stratford Cat Project PO Box 1261 Stratford CT 06614