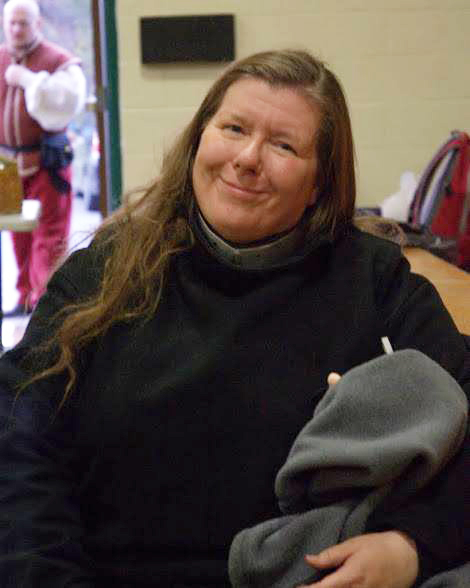 Lady Bryn Millar of the Barony of Endewearde passed away on December 24th, 2017 following a short illness.

Lady Bryn was one of the earliest members of the then Shire of Endewearde, active in her local group for more than 25 years, and received her Award of Arms in 1994 from Gregor and Christence. She was devoted to the art of the rapier, well known in the lists and also a dedicated and active teacher, serving the rapier community as a marshal (and recently as a youth marshal) and also helped to foster a decades-long partnership with the fencing club at a local University. She held the rank of Captain in the Northguard Rapier company, and was recognized as a Captain of Fence (“gold cord”) by the League of Rapier Academies. In 2014 she was awarded the Portcullis of Endewearde in recognition of her martial skill and service. In 2015 she was inducted into the newly formed Order of the Silver Rapier by Omega V & Etheldreda IV at Great Northeastern War.
Bryn also served Endewearde and the Kingdom in many other capacities. She understood early on how to use the internet as a tool for SCA communication and recruitment, and served as her local Webminster for 18 years. She was autocrat or head cook for many local events, and she and her beloved husband, Don Jordan Harvey, opened their home for picnics and gatherings. In addition, she was a gifted needle-worker, holding a Journeyman rank with the Keepers of Athena’s Thimble. In 2003 she was inducted into the Order of the Silver Crescent by Andreas II and Isabella II in recognition of her long service, and in 2015 she was recognized with the Keystone of Endewearde, the Baronial service award, and also with the Queen’s Award of Esteem by Etheldreda IV for her timely work in communicating some important last minute changes to the location of an event.
East Kingdom Web Minister Maistir Mael Eoin mac Echuid posted the following message about her work for the Webministry, “There’s a handful of people who are active every day in our online chat, then there’s another handful who aren’t there daily but who are regulars and routinely interactive. Bryn was one of those.
While she wasn’t someone who does a lot related to the office outside of the office – as a hobby or day job – she always wanted to know what was going on, how and why we were doing things, and how it might relate to her and her group. She was always inquisitive, eager to know more, and stayed on  top of happenings in her office. Ahead of things, even, in being part of the daily and weekly chats.
To see how much more she did before and in addition to being a webminister? Inspiring… I am sorry I did not know her better, but I hope to follow her examples as best I can.”
Founding member of Endewearde, Mistress Brita Mairi Svensdottir, related “Bryn tirelessly wrote deserving people in for awards. Her dedication to keeping up with our many activities and posting timely changes and reminders on our web site, and her assistance with demos and teaching rapier combat are just some examples of the impact she has made in our barony. We will miss her.”
Master Frasier MacLeod adds the following rememberance, “Lady Bryn Millar was part of the glue that helped hold the Barony of Endewearde together. She was one of those constants that made things go, made things happen. She was passionate about her beliefs and the things she held dear and worked tirelessly to improve them, the Barony not the least of those things. She was a longtime Baronial Rapier Marshal, and also served as Youth Marshal along with her husband, Don Jordan Harvey. Her absence will leave a hole in the Barony and the North that will be very difficult to fill.”
Sir Ané du Vey, Baron Endewearde, shared this: “Most know of Lady Bryn Millar’s long time dedication to the SCA fencing community. She has been a steady member for over 26 years.  She was a fencer, a teacher, and a marshal. Her commitment to fence, however, extended well beyond our walls. For most of the last 20 years she has served as a coach and advisor for the fencing club of her local college, and helping to start a love of fencing for many.  For this, and more, Lady Bryn Millar stands as one the premiere members of Endewearde’s Order of the Portcullis, for martial prowess.
Even more than her love for fence, Bryn cared deeply for the SCA and for Endewearde. She has always been one of key forces keeping things moving in Endewearde. She was an organizer not just of events (which she worked many) but of people. It was often Bryn that reminded people of the things that needed to be done. I can’t count the number of times she reminded me to think ahead about the schedule for local practices, or upcoming workshops. It was Bryn who has managed our web presence since its very beginning. It was Bryn who created and kept our Order of Precedence. It was Bryn who kept our calendar organized and updated, and it was Bryn who made sure this information got out to everyone as quickly as possible. Bryn not only made sure things were done… she made sure things were done right. All this doesn’t even begin to scratch the surface or the reasons why Lady Bryn Millar holds Endewearde’s order of the Keystone, for service.
More importantly than any of this… Bryn was a friend. Her loss will leave a hole in our Barony for a long time to come.”
A memorial service for Lady Bryn will be held on December 28th. Details can be found in her obituary by clicking here (Bangor Daily News).
1. Photo Courtesy of Mistress Camille des Jardins
2. Photo Courtesy of Baron Brenden Crane