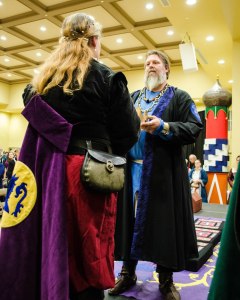 King Ioannes and Queen Ro Honig relinquished their crowns to the East Kingdom Seneschal, Mistress Mercedes Vera de Califia. She held a brief court as regent, after which she called the Prince of Tir Mara to attend her.

Brigantia announced, “Oyez! Oyez! Now comes before you Ivan Ivanov Syn Dimitriov Vynuk Tzardikov, Prince of Tir Mara and heir to the crown of the East!”

Music began, and Prince Ivan processed forward, under a four-post canopy. Ivan presented himself to the Regent.

Mercedes presented the crown to Ivan, and said, “As Seneschal and Regent of the East, I recognize your right to the crown. Please take this from my hands, and take unto yourself the mantle of authority it represents.”

The Prince took up the crown, and turned to face the populace. He held the crown aloft, then said, “By my own hand, as victor in spring Crown tournament, I take my place as Tsar of the East.” He thus placed the crown upon his head.

Brigantia announced, “His Majesty welcomes before him Her Highness, Matilde DeCadenet, Princess of Tir Mara!”

Mathilde processed to the dais. She was escorted up the stairs by her sons. Tsar Ivan took off his crown, and placed it upon the Princess’ head.

Tsar Ivan said, “It is with gladness in my heart that you stand by my side this day. As I have crowned myself King by my own hand, I crown you Queen of all these lands.” The Tsar removed the crown, placed it back upon his head, then placed the crown of the Tsaritsa upon her head.

The Greater Officers of State were called in to swear fealty individually. Their Majesties recognized their new Webminister, in addition to receiving his fealty. 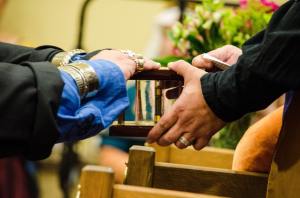 Following ancient Kingdom tradition, The Tsar and Tsaritsa turned and knelt before Brigantia. Brigantia said, “These are the waters from the Bay of the Mists, from the Kingdom of the West. Water is life, and as the West was the birthplace of our society, we anoint our new king and queen as a symbol of rebirth and a new reign with this water.” They were anointed with the waters from the West Kingdom’s bay.

Brigantia placed a vessel before the Tsar and Tsaritsa. Brigantia declared, “This dirt is from the grounds where the first tournament in our society was held. Do you swear upon this hallowed earth that you will lead our Kingdom with justice, honor, and glory, in peace or in war?” The Tsar and Tsaritsa replied, “We do.”

The Viceroy and Vicerine of Ostgardr and Landed Barons and Baronesses were called to swear fealty individually. Their Majesties heard and accepted their oaths.

As the Tsar and Tsaring recessed, the Roll of Kings was read by ten Royal Peers. Their Majesties sat in state for 90 minutes during the afternoon. Following this, they held their first full court.

Tsaritsa Mathilde called into court Vachir Artslanjin, and named him Captain of her guard. The rest of the guard was assembled, and presented with baldrics.

Next were Ioannes Aurelius Serpentius and Ro Honig von Summerfeldt called into court. For their service as King and Queen of the East, they were made a Count and Countess, Ioannes receiving a heavy mosaic created by Christiana Crane, with words by Nicol mac Donnachaidh, and Latin translations and Rome consultation by Tiberius Julius Rufus Primus; Ro Honig received a scroll created by Kayleigh McWhyte. 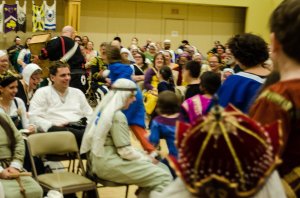 The Children of the East were invited to attend Their Majesties. Tsar Ivan invited Duke Omega to take up the toybox, and the children gave chase to the merriment of all.

Next was Dobby…sorry, no…Dietrich Schwelgengräber called into court. He received a sock, and was set free. 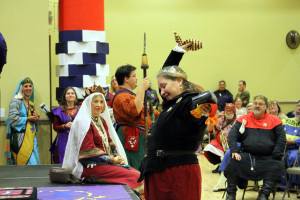 Tsar Ivan and Tsaritsa Mathilde called into their court Mercedes Vera de Califia. They presented her with a sock, and released her from her duty as Kingdom Seneschal.

Their Majesties called before them Katherine Barr. They named her East Kingdom Seneschal, and received her fealty.

The Rapier Melee Champions team were called into court. They offered to Their Majesties their service in any upcoming combat situation.

Her Majesty Mathilde called into court Reinhart Basarab Draculesti. She presented him with her own glove, making him a companion of the Queen’s Order of Courtesy.

Brochmail de Anglespur was called into court. His lady, Aislinn Chiabach, received on his behalf a Queen’s Award of Esteem token.

All those attending their First, Second or Third event were called into court, and presented tokens and thanks for joining the Society.

Their Majesties invited into their court Aine O’Muirghesan. She presented herself as an Ambassador from the Kingdom of Æthelmearc, and gave numerous gifts to the Tsar and Tsaritsa.

Their Majesties called into their court the Order of the Pelican. Noting the order was incomplete, they invited before them Joel of Vestfell. He received a writ to sit vigil at a later date, and a scroll with calligraphy and illumination Faolán an Sccreccain and words by The Anchoress of Ayntre.

The Tsar and Tsaritsa invited into their court Mýrún Leifsdóttir. Recognizing her scribal talents, they called the Order of the Silver Brooch to attend. Mýrún was made a companion of the order, receiving a medallion and a scroll by Tola knitýr.

Margretha La Fauvelle was called to attend the court of Their Majesties. Citing her musicianship, they invited the Order of the Laurel to attend. Margretha was presented with a writ to sit vigil at a later date, with a scroll by Eloise of Coulter.

Their Majesties called into their court Doucette de Verdun. Noting his skill at the equestrian arts, they called forth the companions of the Order of the Golden Lance. Doucette was presented with a medallion, and a scroll by Katherine Stanhope.

The Tsar and Tsaritsa called for the companions of the Order of Chivalry. The order being incomplete, they welcomed into their court Viktor Dominik. Viktor received a writ to sit vigil at a later event, with a scroll by Jonathan Blaecstan with words by Theodora Brysennissa, called Treannah.

Their Majesties thanked the populace for attending their coronation, and thus closed their first court.