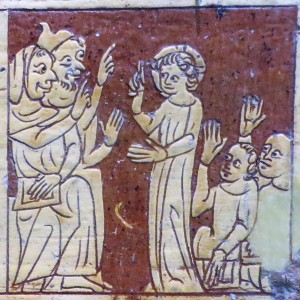 On a bright September afternoon, bards from far and wide gathered around the fireplace at Scotia United Methodist Church, in Concordia of the Snows, to spin tales and sing songs. They came from as far away as Malagentia and the Crown Province of Ostgardr to show their prowess and polish their skills. This would be a friendly competition where the bards challenged each other to stretch and grow. The winner would take home the silver arm band to proudly wear for the next year.

The competition began with each bard performing a piece that let the audience know who they were. The selections ranged from an Italian aria, to Norse poetry, a Japanese folk tale to silly songs. They had the audience in the palm of their hands.

As the competition continued, the bards were randomly paired, and issued each other a challenge. Scores were given for both the challenge given and the piece performed in response to the challenge. As the sun sank low in the sky the audience was treated to tales of magical sea turtles and crabs, by Doug Dunn (don’t open the box!); Lady Lorita di Siena’s comical telling of a Baba Yaga story; the death of Sir Gawain, told in Middle English by Master Grim; a chilling poem based on the Salem Witch Trials, by Siona; and a new tale about Loki, Thor and putting on shoes, by Cedar san Barefoot, of course. There was a song of meadowlarks, performed by Byrd; several songs of Pennsics past; and the beautiful notes of Drake Oranwood on his new lute-guitar.

The competition was won by Master Peregrine the Illuminator, with his lusty tale of illuminating the grape. Be sure to ask him to tell you that story when next you see him.