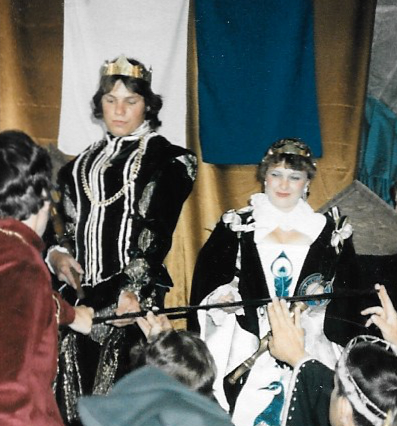 Queen Anna Ophelia Holloway Tarragon is currently sitting her 10th reign as a Queen ( plus one reign as Princess of the then-Principality of Artemesia) in the SCA. According to the Royal Geneaology of the Known World, Her majesty has sat on the throne more times than any other Queen. She graciously agreed to grant the Gazette an interview about her extraordinary experience.

Over the course of 10 reigns, she has seen much change in the Society, especially in the technologies that we use to communicate with each other and in the amount of information available to us for documentation of the things we do.She’s also seen many geographic differences across the SCA, from the West where the King’s word is law, to here in the East where things are much more “democratic” and cooperative. Greater access to information has also lead to an increase in the seriousness of the game for many.

Faster communication and busier schedules have lead to a decrease in spontaneity in many aspects of the SCA, and yet much has remained the same. The passion that people have for whatever it is that they pursue in the society has always remained a constant that Her Majesty admires.  In addition, she adds “The look on someone’s face when you give them an award is still the same today as it was years ago”

Another constant over the years has been her perception of her role as Queen. Before allowing His Majesty Brion to fight for her in a Crown Tournament for the first time, she wisely asked him what he expected from her as Queen. One of the things he asked from her was for her to “Look and act like a Queen” and she has always tried to live up to the ideals of grace, courtesy, and comportment that define Queenliness.

No matter the Kingdom, people want their Queen to be someone who is kind and caring and holds genuine love in her heart for the people of her Kingdom. She knows from experience that people “will do anything for you if you honestly love them.“

One might imagine that it is difficult to find a fresh approach to each reign, having reigned as many times as Her Majesty has.  For Queen Anna, the new people that are involved with each reign keep her engaged and full of love for the role and the Kingdom. Her current Court include 10 people she had never met before she and His Majesty took the thrones for this current reign. Seeing the Society and the mechanics of running a Reign through their eyes, eyes that are still bright and shiny and full of wonder at this game we play, is something that fills Her Majesty’s own heart and eyes with love.

Another topic that lights up Her Majesty’s face, and something she describes as “one of the best parts of being a Queen” is seeing the look on people’s faces as you recognize them for their hard work by giving them an award.

Having the privilege of creating moments for people is one of the most important and best part of being Queen for Anna. To those who would aspire to wear the crown some day Her Majesty would remind them that though it is a great job, a fun job, it is still a job, and it requires engagement seven days a week to support and sustain “the dream” for an entire kingdom. It’s not all “parties and prezzies and awards”

One lesson that she has learned over the years is that “People are far more capable and willing to do things than you think they are…all you have to do is ask them nice… Just be kind.”

When asked what inspires her to keep returning to this role, she answers simply, and with a sincere, warm smile in her eyes: “My Duke…” later she would elaborate and say  “I am very grateful for the love and respect that Brion shows in me that he keeps doing this… that he keeps asking me to join him.”