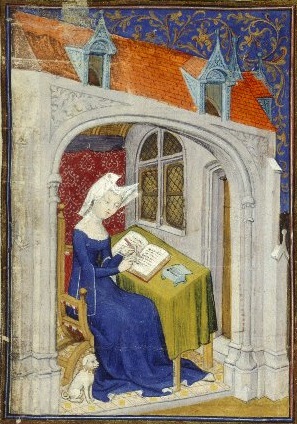 Our fourth A&S Research Paper comes to us from Baroness Ysabella de Draguignan, of the Barony of Dragonship Haven, and is drawn from her study of historical household management; here, she describes for us how one of her days might have progressed. (Prospective future contributors, please check out our original Call for Papers.)


She was educated at Rouen in upper Normandy until she was sixteen. Her elder brother, Jean-Claude, arranged a marriage to Baron Gerard D’Aigues-Mortes in 1396 when she was then twenty, which united the largest southern and northern salt-making families and created a regional monopoly on salt. They have two children; Lillian and Michel. Ysabella was granted the title of Baronne de Draguignan by the King in 1403.
Ysabella’s Day
Dawn
Breakfast
Beginning Work
Correspondence
Dinner
Afternoon Leisure
Supper
Evening
And So To Bed
Appendix (Recipes)
Bibliography
Dawn: Ysabella wakes up each morning around 6am, says a Kyrie, rolls over, and arises from her down-stuffed mattress. She pulls the tapestried cloth of her canopied bed aside, stands and moves to wash her face with fresh water her maid has brought in this morning. She brushes her hair with a mixture of powdered herbs, and anoints her face with a cerotum (ointment made with oil and wax) to lighten her complexion and keep it safe from the sun. She then makes her cheeks red by powdering them with powdered red sandalwood. As she does this, she perhaps recites another prayer if she is feeling particularly devout. Her favorite is the following:

Translation:
Lord God Almighty and Eternal Father. Who has allowed me to reach the beginning of this day, by Your holy power, protect me from all danger, so that I may turn away from any mortal sin, and that by Your gentle moderation my thoughts may be directed to do Your holy justice and will. Through Christ amen.
She prays for the success of Pope Clement VII, (who resides in Avignon and whom she firmly believes is the true Pope) and for the safe return of her husband Gerard D’Aigues-Mortes from business travel. She also prays for her brother Adhemar’s conquest over the English, whom she hates with a passion that is very nearly zealous. (The Hundred Years War is well underway.)
Her maid, Maria de la Parra, who is a daughter of an affineur d’argent (gold refiner), helps her dress and arranges her hair with a silk veil. She adds an enameled bronze pendant in the shape of a trefoil to represent the Christian Trinity. Each lobe of the trefoil is outlined in green and red enamel. In the upper right lobe is a green ‘Y’ and in the bottom lobe a red ‘D’, the monogram of her name; in the third lobe sits a red dove to represent the Holy Spirit.
Back to Top


Breakfast: As she walks to the small hall to eat with the rest of the house, she verifies that the chambermaids have swept the halls and entry way where people might gather. Although breakfast was not as common as it is today, it is the custom of her family to partake and she had brought this tradition with her when she moved south, even if the clergy frown on it. She also refuses to allow meals in private unless ill, or in the field, but requires her entire household to consume their meals together.
Breakfast consists of a fish, such as herring, with garlic sauce, cheeses, and watered wine. She does not eat wheat or rye because her physician, Marque Roumain, has determined the cause of her illnesses were because both were hot and humid, and affected her humors, whereas rice and millet where cold and dry. (It is now thought that the Baronne Draguignan suffered from celiac disease.)
Back to Top
Beginning Work: After breakfast she takes her ladies in waiting with her on her daily rounds. These young women were all from wealthy families who, through this connection, hoped to be well married. The ladies in waiting include Maria, her maid, and Armanda, the daughter of one of the avocets (lawyers), Luc de Clerc, who is in the estate’s employ. Her other ladies in waiting are Bornazela, the daughter of a silk-hat maker, and Willelma, a book-seller’s daughter.
Her first daily visit is to instruct Dame Ramunda the Beguine on the tasks and priorities of the day, and it is Ramunda’s responsibility to ensure successful resolution of those matters. Ramunda would then speak with the head steward of the house, Jehan, as to what needed to be accomplished for the day.
On this particular day, however, Jehan needs to speak with Ysabella herself, to determine which animals will be slaughtered, smoked or salted on the feast day of Saint Martin le Miséricordieux (November 11th). That meat will be necessary to get them through the winter. The winters have become far colder than previous, and the older generation enjoys telling their Northern mistress this, along with tips and ideas on how to thrive in the new climate.
As there are two estates, Draguignan and Aigues-Mortes, and her husband was often absent for long periods of time, it is important that Ysabella understand the administrative duties of the estates. She knows the value of her estates, their expenditures, and the relevant law, in order to conduct business and form contracts with merchants.
Back to Top
Correspondence: Often, she becomes angry regarding these matters, and she writes her brother of her troubles, to vent her frustrations with someone she trusts. On this day, she writes the following:

I pray that you are well. I pray to God our glorious Father for your victory in Aquitaine. I know the Holy Mother will protect a most-beloved brother. May your men be strong and follow your orders properly.
Oh my brother how thankful I am of your hand in my education, and my husband’s willingness to continue it, or I would not have been better at dealing with the workmen. I do forget their coarse and lying natures since it is not in my nature to be so!
My good husband was away from his estate in Aigues-Mortes while this took place, having business in Avignon…
As directed by you I made certain that Master Jehan found good men, who do not curse or were of an indolent nature. I also made certain my husband’s clerk Luc wrote a proper contract first and had them make their mark so there would be no change of price afterwards, as is often the case: When they come to your home yelling to all that you are a liar and false!
A deal was made and even though some money was given in exchange for service, every excuse was made to put off the labor. First Master Jehan was told the laborer must measure again the space. But, it took a week to do so. Then after, Luc suggested that a date of completion be added to the contract, to which the workers agreed.
However when this day drew near a fellow came to Jean to inform him that wood could not be got!
There were no horses to pull, or wagons to carry as far away as Avignon and as south as Marselha, which you know is only a day’s walk.
I demanded a man come and tell me every day of the progress. Which, you may not be surprised, hurried the progress along. The man came at length, began work, ate lunch, and then left shortly after!
This happened every day for three days in a row, with no work on the Sabbath, coming back Monday and briefly Tuesday, on which he demanded his pay.
Back to Top
Dinner: Dinner is a large meal and served at midday. Again, she requests her household to join her in this meal unless detained in some other matter. But the reason for missing the meal has to be sufficient! She is fairly strict about that, unless you are working far in the fields—it is unreasonable to request workers to travel in for midday meals, but they will be present at supper. Dame Ramunda is responsible for working with the cook to dispatch meals for these workers during the day, and the men and women who take them their meals will also sit and eat with them to ensure continuity in her custom.
As people come to the table they wash their hands with scented water poured from an aquamanile or pitcher over a basin.
Dinner consists of several courses:
First Course. Norse pasties, Cameline-flavored meat soup, beef marrow beignets, roasted large Provençal figs topped with bay leaves, cress and herring with vinegar.
Second Course. Carp, poached plaice, Lombard tarts, venison and small bird pasties
Third Course. Frumenty, venison, glazed meats, fish in aspic, fat geese and fat capon a la dodin.
Fourth Course. Hippocras and wafers to finish
Back to Top
Afternoon leisure: Her life is not all work; being a noblewoman awards her far more leisure time than many women. Although she can embroider, it is well known that she does not enjoy it. She often spends time in her gardens watching her children play. A favorite game of theirs is called Salt Post (freeze tag), where the person who was tagged is turned to salt, much like Lot’s wife of the Old Testament.

She enjoys playing Jeu de Volant and let her children join in on many occasions. (Jeu de Volant is an early version of badminton and is played without a net, using small rackets, called battledores, and a shuttlecock that is a cork with feathers at the top.) Ysabella has a shuttlecock trimmed with peacock feathers (to match her heraldry!) made by her keeper of fowl.
Back to Top
Supper: Supper is a lighter meal in the evening which again is taken by the whole household, including the field hands and kitchen staff that may have been absent earlier at dinner.
Today, supper consists of hericot of mutton, rice topped with fried almonds, compote topped with white and red comfits, and hippocras and wafers to finish.
Evening: After supper the family spends time playing cards, or her favorite game, astronomical tables (a seven player variant of backgammon), and listening to music before evening prayer and bed. Her children play with small knights, horses, and poppets made from clay.
Back to Top
And So To Bed: The Trotula, a 12th century text concerning the health and wellbeing of women, was adamant that women bathe in warm water and herbs often, so a bath is drawn for her before her bed. She washes her hair with the ashes of burnt vine, chaff of barley nodes, and licorice wood, and sowbread that was boiled in water and strained. When she finishes washing her hair, she anoints it with oil made of colocynth, oil of laurel, henbane seeds, and orpament to keep her hair black and thick. She then combs her hair again with the same powder and rose water that she used in the morning.
Her sleeping chamber is swept and strewing herbs—costmary (tanacetum balsamita) and dried sweet woodruff (asperula odorata)—are laid across the floor to make the room smell sweet.