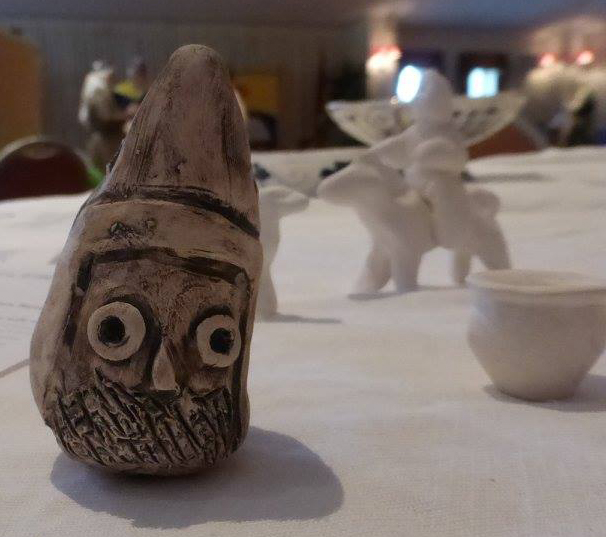 The second Artifacts of a Life event was held this past Saturday in the Barony of Carolingia. The first such event was held two years ago in the Barony Beyond the Mountain. Both have been joint events sponsored by the two Baronies, and they are the inspiration of the co-Stewards, Baron Jehan du Lac and Mistress Elizabeth Vynehorn.
Entries in this Arts and Sciences competition represent the “artifacts of a life” of a person from our period of study. Part of the fun of experiencing the entries was learning how the artisan tells the story of what the items represent. There were three categories — Typical for entries with 3 to 5 items, Elite for entries with 6 to 9 items, and Village for entries of 6 to 9 items by a team of 2 to 4 people. There were no Village entries, but 11 entrants participated in the other 2 categories, as follows:
Alesone Grey of Cranleigh — presented a “book of secrets” and various products from it, as used by a grocer’s apprentice (specializing in confections) of late 16th century England. 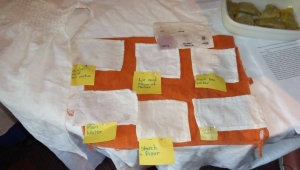 (Left photo by Ygraine; right photo by Tristan.)
Barbeta Kyrkeland — demonstrated lacemaking and presented the work and tools of a professional lacemaker. Two shapes of pillows and several forms of bobbins were shown, along with pattern strips and a lace samples book. 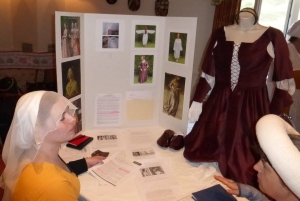 (Photo by Tristan.)
Elysabeth “Lissa” Underhill — created an informative display of beads and the methods of glass bead production. 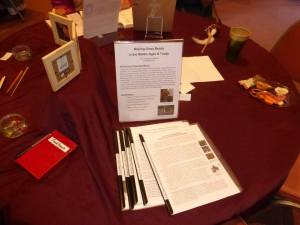 (Left photo by Ygraine; right photo by Tristan.)
Lorenzo Gorla — displayed drawings and text for a fencing manual, and a letter of introduction to the resulting book. 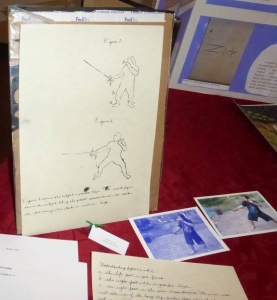 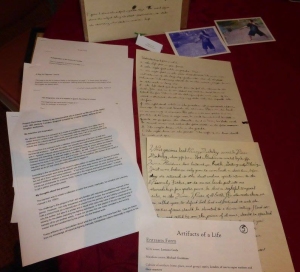 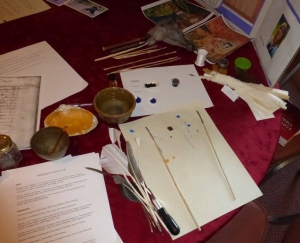 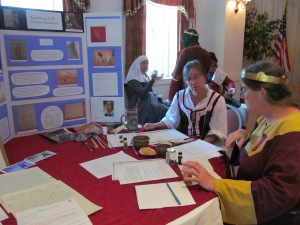 (Left photo by Tristan; right photo by Ygraine.)
Pakshalika Kananbala — created a lovely setting in which to display a noble Indian woman’s furnishings and accessories.

(Left photo by Ygraine; right 2 photos by Tristan.)
Sorcha Dhochair inghean ui Ruairc — items all related to the life of a monk in 8th Ireland. One quoire from a hand-copied psalter, a wine sieve, a leather cover for the eventually finished psalter, and a knotted prayer cord. 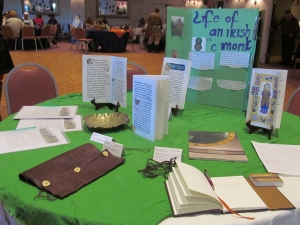 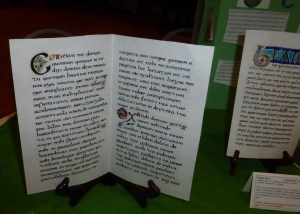 (Left photo by Ygraine; right photo by Tristan.)
Sunnifa Heinreksdottir — displayed a collection of everyday items which a 6th century Anglian woman on her deathbed is leaving to her daughter, including an unfinished basket (of plaited and coiled day-lily fibers) which she admonishes the daughter to finish and deliver to fulfill her promise. Included were mats and baskets, a sprang loom bearing a linen work-in-process (from flax grown, processed and spun by Sunnifa), spindles with clay whorls (which she fired at Pennsic), a hawthorne needle, handspun wool yarn, and various other items.

(Left photo by Ygraine; right 2 photos by Tristan.)
Ysabelle du Draguignan — presented items preserved by her family or found during the excavation of her ancestors’ Castle Draguignan in France. These consisted of two pieces of lustreware pottery, a painted glass, a number of clay toy figurines and a rattle, and fragments of stained glass and pottery.

(Left 2 photos by Ygraine; right photo by Tristan.)
At the end of the day, a brief Court was held by Baroness Nicolette of Carolingia, who welcomed to the dais her noble cousins, Baron Dorigen and Baroness Eloise of the Barony Beyond the Mountain. Each of Their Excellencies called forth artisans they wished to personally recognize. For Baroness Nicolette, this was Lady Sorcha, whose display moved her with its elements of a spiritual life. Baron Dorigen and Baroness Eloise praised Lady Elena, especially noting that she made shoes to go with her gown, and Lady Lissa, whose work had inspired Her Excellency to try beadmaking herself.
Then were called into Court Baron Jehan and Mistress Elizabeth, to announce the winners. For the Typical category, Lady Lissa received the top honors, and Lord Wilhelm came in at second place by mere fractions of points. In the Elite category, Lady Sunnifa was declared the winner, and Baroness Alesone received second place honors, also by a very narrow margin. The winners received prizes of beautiful wooden chests, and the runners-up received baskets of assorted goodies and useful items. 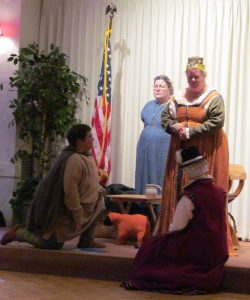 Baron Jehan and Mistress Elizabeth then called forward Master Peregrine and thanked him for serving as tabulator of the scores throughout the day. Baroness Nicolette then expressed her appreciation to Baron Jehan and Mistress Elizabeth for creating such a unique way for artisans to show their work and such a comfortable competition format, and she presented them with personal gifts.
Reported by Baroness Ygraine of Kellswood.
Photos by Master Tristan de Warrell and Baroness Ygraine of Kellswood, as noted.