July 14, 2015 Correction: Practices/tryouts for the Archery Champions Teams will be held Saturday, Sunday and Monday, from 5pm to 7pm — not on Tuesday.
Reported by Baroness Ygraine of Kellswood 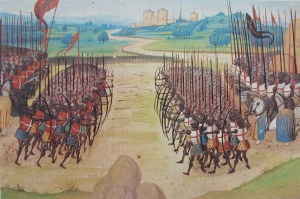 Shoot the War Points for the East and our Midrealm allies, shoot for the fun of it, or both! There will be plenty of opportunities again this year. Target archery accounts for 7 War Points — 1 for the Archery Champions Team competition, and 2 each for the 3 traditional populace shoots. The populace results will be announced on Friday.
Range set-up takes place on Monday, July 27, starting at 9am, and assistance is very welcome.
The Archery Ranges are officially open from 9am to 5pm beginning Sunday, August 2.
Before August 1, and outside of the official hours, a range can be open if there is a Warranted Target Archery Marshal willing to run the line at a range. (You may bring your own Warranted Target Archery Marshal with you.)
Equipment must be inspected (once) with each archer who will be using it before it can be used on any range.
Archery Marshal meetings will be held Friday, July 31 at 4pm, and Sunday, August 2 at 4pm. Marshals are required to attend one of these meetings, and to serve two shifts on the range.
The Saint Sebastian Shoot, sponsored by the Kingdom of Atlantia, will be Saturday, August 1, 10am to 5pm.

The 3 Populace War Point shoots will be similar to the  last few years, but with a Game of Thrones theme: A  100-yard Castle Turret with a guard inside and a moat  and monster at about 50 yards; a timed Castle  Window shoot at approximately 30 yards; and a  Warrior shoot at the archer’s choice of distances from  15 yards to 55 yards. Archers may shoot up to 5 times  at each of the 3 shoots, on any day or combination of  days. No archer may shoot more than 5 times at each  of the ranges.
Populace War Point Shooting is offered on these days:
Sunday, August 2
Monday, August 3
Tuesday, August 4
Thursday, August 6
Practice is allowed on the actual war point ranges from 9am to 11am.
Official war point shooting will be run 11am to 5pm.
It is unlikely that war point shooting will happen on Wednesday, August 5, from 3 to 5pm, as listed in the Pennsic booklet. (As of writing this article, opinions were divided on this.)
Archery Champions Practices will be held Saturday, Sunday and Monday from 5pm to 7pm. This year’s team will be made up of 15 archers and 5 alternates each from the Midrealm and the East, for a total of 40.
On Sunday, August 2, from 2pm to 5pm on the Family Range, the Barony of
Roaring Wastes is hosting a Known World Baronial Archery Championship
Tourney
On Monday, August 3, and Tuesday, August 4, on the Family Range, there will
be a Beginners’ Class from 9am to 10am for those aged 12 and under, followed by a Monster Novelty Shoot, from 10am to 11 am.

On Wednesday, August 5, the range is closed to  general shooting for the Archery Champions Team War Point Competition, 9am to 2pm.
The annual Period Shoot will be held Wednesday, August 5, from 5pm to 7pm. Participants must be as authentic as possible in their clothing and equipment.
A full and updated schedule of War Points, novelty shoots, family novelty shoots, and classes will be posted at the Archery Marshals’ tent.
Archery range tear-down starts Friday, August 7, at 9am and continues until it is  done. The more hands that help, the faster it will go! Anyone who has lost arrows  or other archery gear should take a final look in the marshals’ tent before  everything is packed-up.
Closing Ceremonies are Friday afternoon, August 7.
For more information, including equipment standards, please see the Pennsic
Archery web page:
http://www.pennsicwar.org/penn44/DEPTS/MARTIAL/archery.html