Paladin’s Pantry as reprinted from the Æthelmearc Gazette
An interview with Morien MacBain, the founder of Paladin’s Pantry. The Pantry is a charity rapidly having an effect across the Known World, providing donations for food banks at the ends of larger (and now smaller) SCA events.
Who are you? 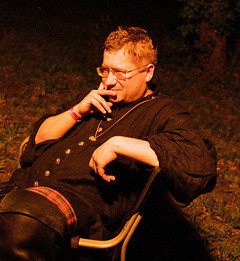 Wow, tough one—right for the existential throat! I’m Morien MacBain, and like many Scadians, I tend to define myself through my associations and my activities. I have the honor to serve some very worthy gentles; I am squire to Count Sir Jehan de La Marche, now fostered to Baron Sir Graedwynn mab Teyrnon, I’m also protege to Her Grace Mistress Tessa the Huntress, and Equerry to Mistress Shishido Tora Gozen (that’s like a squire, but for mounted combat). I also have the honor to be the captain of the White Company, and the founder of Paladin’s Pantry. I am also a man richly blest with the women in his life.
What is Paladin’s Pantry?
It’s a charity based around three inescapable truths: SCAdians tend to be generous and open-hearted people, we tend to massively overbuy for camping events, and our stuff expands dramatically during events, making it more difficult to pack! We operate food drives at events which allow people to contribute their extra foodstuffs to local food banks (usually the one closest to the site). It’s a simple idea, but it’s really taken off.
When/How did it get started?
A few years ago we were packing to leave Pennsic, and we were trying to figure out what to do with our camp’s large amount of cans, boxes, jars, and

bottles of unopened pantrylogocomestibles, and casting wild surmises about who among us had even bought some of the items in the first place. I had run food drives at my school for years, so we wound up throwing it in the trailer and taking it back to donate. Leaving camp, we passed the Pennsic dumpsters, and saw the huge amounts of castoffs. On the way home, it occurred to me that it might be possible to reclaim some of that stuff for people in need. The next year, we got it off the ground. Most of the donations came from three groups from Aethelmearc and Atlantia (BMDL, the Chalk Man Pub, and the Lusty Wench Tavern). We only got about a trunk full, but it was a good proof of concept. The next year we started advertising, and got increasingly savvy about using social media to get the word out. Last Pennsic we collected an estimated four to five TONS of food and camping supplies. It’s just amazing! We’re the largest single donor the Portersville food bank has (including the government), and I know we can do even better! Last year, we spread our operations to Lilies War in Calontir, and this year we’ve had them at Gulf Wars, Blackstone Raids, and Lilies War, and of course we’ll be having them at Pennsic and War of the Wings in Atlantia as well. The idea really seems to resonate with people.
How does it work?
We usually contact an established food bank near the site, and arrange to have them send a pickup on a given day. Then as the event gets closer we do a full-court media press including Facebook, the on-site newpaper, if one exists, the cry heralds, flyers on the message boards, an ad in the site booklet, if one can be arranged–anything we can think of, really! We tend to post a list of donation sites, but we also provide a number which people can call or text to schedule a pick-up. We also have volunteers who go from camp to camp dragging armor carts and collecting face to face (Her Excellency Constance Glyn Dwr of the BMDL has had astounding success the last two years doing that). Then the driver arrives, I hop in the cab, and navigate him around to our various collection/staging areas around site. (We had eight last year.) We load everything up until the truck is full, then go unload at the food bank, and come back for more! Our volunteers are the best. It’s a great team effort!
What’s the deal for Pennsic this year?
This year we’ll be trying to break last years record, of course. We’ll be utilizing multiple drop-off points and plan to expand our number of camp-to-camp cart collectors. The number to schedule a pick up will remain the same (304-283-5640), although I’m going to try to delegate the phone-answering/pick-up scheduling job to someone else during battles and whatnot. We can accept all sorts of canned goods and non-perishables, but can also take relatively shelf-stable items like fresh fruit, eggs, cheese, cakes, pies, bread, and cured meats like ham or bacon. We also gladly collect still-serviceable tents, sleeping bags, rain gear, cots, flashlights, lighters, EZ-Logs, jackets and coats, and pretty much anything else that might help a homeless person out. Toiletries are a huge boon: toothbrushes, shampoo, toilet paper, paper towels, soaps and detergents, baby wipes, you name it! Pretty much the only things we don’t accept are alcohol, cash, and propane canisters.
What have some of the results been in the past?
As I mentioned, we collected over three pickup truck loads at Pennsic last year, which the staff at the food bank estimated at four to five tons.
Master Brandubh O Donnghaile ran the drive at Gulf Wars this year. He reported “This year was the first time that Palladin’s Pantry was active at Gulf Wars; though Morien couldn’t attend he made contact with the autocrats, publication staff and local food pantry for the food drive. The week started slow with a few bumps, but once camps started to tear down, donations poured in. The local food pantry filled up their pickup truck twice with all the donations, and were very pleased with the donations not just of food items, but also of camping gear.”
We’ve gotten some odd donations (macrame lemons spring to mind–no idea what those were in aid of), and some astonishing feats of generosity as well. I remember a 22-lb Virginia ham; I wonder who went home from the food bank with that monster? Overall, I’m always sure it’s going to be a disaster, and then the gentles of the SCA just rain down largesse, and we end up with mountains of charity. It’s quite a moving and hopeful sign, and never ceases to astonish.


Do you need volunteer help? How should people contact you?
We ALWAYS need help, and we’ll need more than ever this year to beat last year’s record! We’re also hoping to expand operations to Estrella War, Battle Moor, the Great Western War, and the Fifty-Year Celebration in 2016. Anyone who will be going to those events and wants to help out would be welcome. To get in touch, please feel free to call me at (304) 283-5640, email me at: svandevander@gmail.com and/or join the Paladin’s Pantry Food Drive group of Facebook.
Do you have a favorite story about the Pantry?
Last year there was so much that the food and flats of water and so on overflowed the shelves and covered the floor at the Portersville facility. We had to make little paths through it to allow access to the fridges and freezers, and it was still piling up in the parking bay. When Cindy Burns, the director of the food bank, saw it all she burst into tears. (They had been very close to a bare cupboard before Pennsic.) That place provides help to over seventy households in the area. Everyone thinks to donate around the holidays, but summer is a low time for donations usually. It was the largest one-day donation they had ever seen, by far. Pennsic made a huge difference in the quality of life for scores of families who never set foot on site!
Anything else you can think of?
It occurs to me that if each person at Pennsic donate just one pound of food, we’d be looking at over SIX tons! We’ve just begun to see what this sort of drive can do. Helping those in need is part of chivalrous behavior (in addition to one facet of basic human decency), and SCAdians are great at it! People we will never meet are hungry and need our help. Paladin’s Pantry to the rescue!
I also want to add a sincere vote of thanks to the most noble populace of the Barony-Marche of the Debatable Lands, especially their illustrious Excellencies Constance and Liam, who have been the cornerstone of the drive since its inception. Vivat!
Baroness Constance Glyn Dwr has enjoyed working with the Pantry. “The first year Morien told me what he was doing, I was all in from that moment on.” she says. “I knew how busy everyone is during pack up at Pennsic and figured people couldn’t spare the time to drag their extras to a location point that might be far from them. So I grabbed our armor wagon and just started walking around calling out for donations. I don’t know how many trips I made that first year but I we were overwhelmed with people’s generosity. A lot of people hadn’t heard what we were doing until I went by calling it out, so it helped get the word out for the next year. The second year we did it, which was lastlast year, several members of our camp helped out with the wagon collections, people were so excited to get to help it was really awesome to see.

“This year it was my husband’s Baron Liam’s idea to take it to Blackstone Raids, where we also had a wonderful turn out.
“It’s so very heartwarming, to see some SCAdians who themselves don’t have a lot sometimes, chasing me down to give me items for the pantry. I have heard so many times ‘I’ve been there, and want to give back.’ It’s things like that, that keep me going, pulling that wagon around.
“We’ll be collecting at the BMDL camp again this year, so look for our device which is a green field with two white crossed swords with an apple chief.”
Paladin’s Pantry is the embodiment of what we are as SCAdians! Plan to help us – and others – at Pennsic this year.