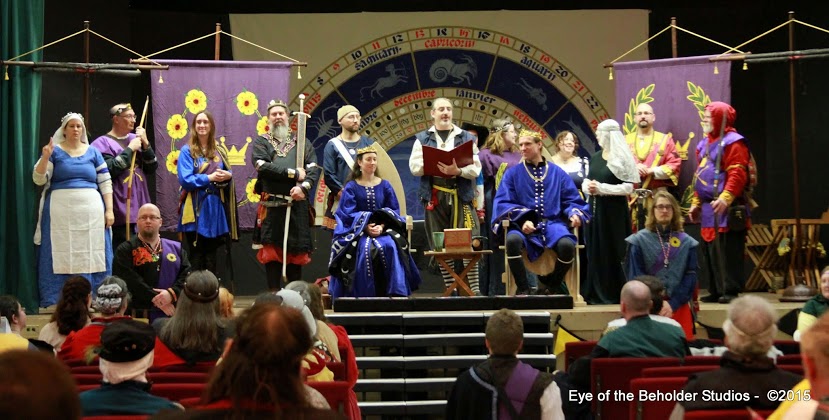 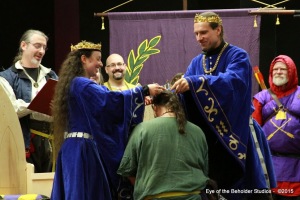 Item.  Their Majesties summoned Cristoff Gockerhan von Loch to attend upon them, whereupon they created the said Cristoff a Baron of their Court, the which deed was confirmed in a document illuminated by Robert of Stonemarche and calligraphed by Nest verch Tangwistel.
Item.  Her Majesty invested Chiara di Marte da Venezia with her Queen’s Cypher.
Item.  Her Majesty endowed Eva Woderose with her Queen’s Cypher.

Item.  Their Majesty summoned before the Tyger Thrones Simon Gwyn, captain of the Queen’s Guard, and created him a Baron of the Court for his good work, the which deed was memorialized in a document authored by Alys Mackyntoich and calligraphed and illuminated by Jonathan Blaecstan.
Item.  Their Majesties summoned Martyn de Haliwell to attend upon them and appointed him a Tailor to the Crown.
Item.  His Majesty invested Martyn de Haliwell with his King’s Cypher.

Item.  Her Majesty invested her good and honored lord, Matthias Grünewald, with her Queen’s Cypher            .
Item.  Their Majesties thanked the musicians playing for the Court and the day’s festivities.

ena Mercedes, the Seneschale, Sir Jibril, the Earl Marshal, and Master Ryan, Brigantia Herald, reported to their Majesties that, in accordance with prophecy, their time upon the Throne had come to an end; whereupon her Majesty dismissed her Guard; and whereupon their Majesties caused themselves to be divested of their robes of estate.
The Crown Prince and Crown Princess, acknowledged heirs to the Tyger Throne, entered the Court and were invested with the Crowns of the East in accordance with ancient law and tradition; whereupon Edward and Thyra, illustrious and noble, departed for their personal estates.
I, Alys Mackyntoich, Eastern Crown Herald, wrote this to memorialize and make certain all such things that were done and caused to be done as above stated.
Witnesseth:
Master Ryan Mac Whyte
Master Rowen Cloteworthy
Master Malcolm Bowman
Don Donovan Shinnock
The Gazette thanks Baroness Cateline la Broderesse for the photos used in this article.