November 15th, as well as tourneys for rattan and rapier to select Baronial Champions. The main A&S competition was an unusual design and involved entrants judging other entrants of similar experience level. Advisers discussed considerations for judging with each group and were available for consultation throughout the contest. Many thanks to Mistress Anarra Karlsdottir and Mistress Michel Almond de Champagne who guided our novices, Mistress Briony of Chatham who helped the Artisans, Master Jehan du Lac who assisted the Experienced Competitors and Mistress Nest ferch Tangwystl who worked with the entrants in the Laurels and Masters group. 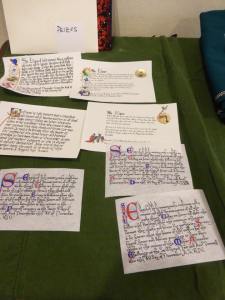 Winners of this competition were:

Artisan – Gideon ha-Khazar) – Research – “Why is this knight different than all other knights?”

Laurels and masters – Mistress Eleanor LeBrun — Evolution of Hoods through the SCA period.

Our thanks to Lady Bronwen Rose of Greyling called Brose for submitting this report, and for the use of her photos.