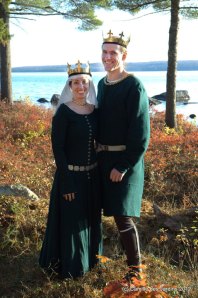 Long before the day of Crown Tournament dawned dark, rainy and muddy, the poets of the East Kingdom had already been working to shine light upon the tourney field.  As a way of honoring the consorts role in the pageantry of the day Her Majesty Thyra asked her Queen’s Bard Mistress Aife ingen Chonchobair to have praise poems written for each one of the 49 registered consorts.

Mistress Aife said, “While we say that Crown Tournament is supposed to be about fighting for the inspiration of your consort, the consorts can get lost in the day as everyone focuses on the fighters.  Writing about the consorts seemed like a natural way to reflect the spirit of Crown Tournament.  The mechanism to make all of that work was the letters of intent.  If Their Majesties were willing to require that the combatants write a few lines about how their consort inspired them, I could then give those letters to poets who could make their words into poetry for their consorts.”   Their Majesties were willing. The letter of intent was modified to require the combatant to tell the Crown how their consort inspired them.

In the meantime, Mistress Aife started posting on social media asking for poets who were interested in a secret project. She received responses from poets not just from the East Kingdom, but also our artistic brethren from the Middle,  Aethermearc, Ealdomere, and Ansteorra .

As the letters of intent were received and passed on to Mistress Aife, she assigned a poet to each fighter/consort and shared privately what each fighter had written.  She asked her volunteers to write a short poem, somewhere between 4 to 14 lines and to use the words of the fighter as inspiration as they wrote.  Many of the poets selected the style of their poem based on the persona of the recipient, which often encouraged the poet to learn a new verse form.

An email list was created and then the poets got to work.  Writers who did not personally know either fighter or consort could ask the others on the list for ideas or direction.  Some of the most enjoyable aspects of the process was the banter on the list, as the poets asked each other for advice, offered examples of period verse forms or spontaneously broke into limericks.   At the same time the poets maintained a deep respect for of the sometimes very private words a fighter offered their Crown about their consort.  As a result most of the poetry has still not been read by the other poets who participated in the project.

Mistress Aife reported back to the poet-volunteers that the poems were well received and that new participants to crown tournament in particular were very touched to receive such a gift from Queen Thyra and the poets of the known world.  “I thought the poem was very sweet,” Lady Aesa feilinn Jossursdottir said, “One of the best parts was seeing that someone I know and like wrote the poem which in itself is special to me.  When I do any sort of artwork or project, I get very emotionally attached to the piece and invest a lot into it.  To get a work of art, in this case poetry, from a friend was means a lot to me.”

The list of poets , the combatants and the consorts who inspired this art can be found on the East Kingdom Wiki.

Some of the poems produces are also on the Wiki, where permission has already been granted by the consort, combatant and poet to publish the poem.

Mistress Aife can put consorts in touch with their poet if they would like, and she can send along poems to the consorts who could not be there on the day of Crown Tournament.  Additionally, consorts and fighters can let her know if they are willing to have their poetry publically posted or performed.  Mistress Aife can be reached at:  alord@ilk.org