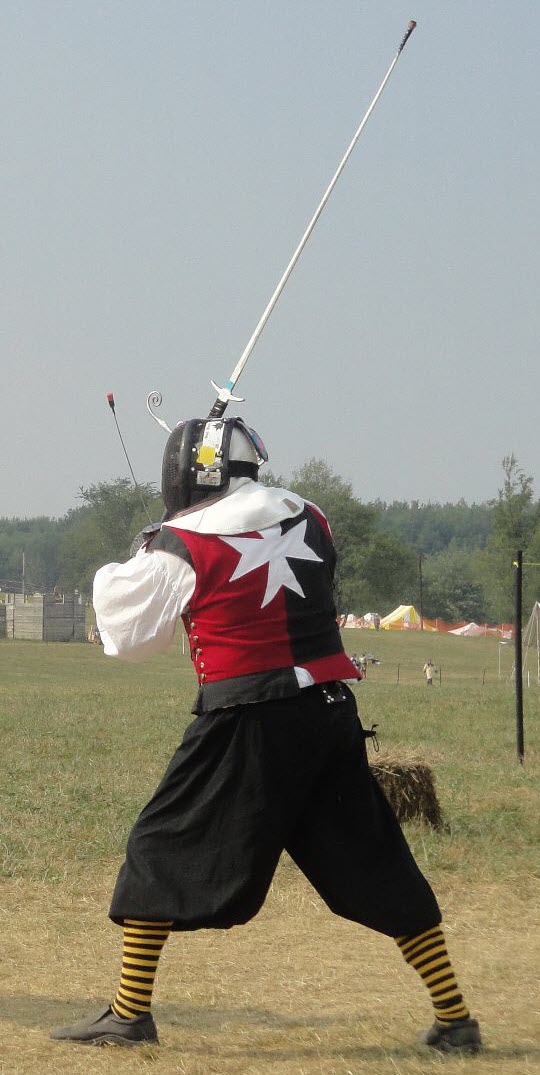 It is with great sadness that the Gazette reports on the passing of Don Edmund the Lame. He passed away on the afternoon of January 5, 2014, after a battle with cancer.
Don Edmund was active for many years in the Society, across multiple continents and Kingdoms.  He was instrumental in starting rapier activities in Lochac, and continued his efforts in that area across the West and into An Tir, holding fencing awards from all three kingdoms, and service awards from two of them. He was recognized in the Kingdom of Lochac with the Order of the Rapier and the Silver Tear. He received a Grant of Arms, was recognized as an Ancient Guildmaster of Fence, and received the Leaf of Merit from the Kingdom of the West. He was inducted into the Order of the White Scarf in the Kingdom of An Tir.

He was a common sight on the rapier field at Pennsic. He was known widely for his use of a two-handed sword of prodigious size, and was a member of House Bloodguard, regularly fighting in their colors. On hearing the news of Edmund’s passing, Duke Andreas Eisfalke Von Ulm, Hochmeister of House Bloodguard, had the following to say:

“Yesterday I lost a friend and household brother but only for a moment. Paul and I met at 30 Year Celebration in Oregon. The day we met we were instantly friends. We both shared the same sense of humor and he taught me much of hoop snakes and drop bears. From that day on we were as thick as thieves and although we lived far apart our brotherhood made us feel like he was right next door. Paul is gone from this realm and I will miss him for the moment. But just like 30 Year, I imagine that when I pass; I will be greeted by his big smile and he will say something like ‘What took you so long, Mate?’ I have something to look forward to when it is my time to depart. Find us a good place to eat when I get there.”

He was also well known for his courtesy, willingness to help, and his friendliness despite his ongoing insistence that he was a grump.  Master Liam St. Liam said of Don Edmund “What always struck me about him was he’d see a friend, and that smile would light up and you’d be convinced he thought seeing you was the best thing that ever happened.”

In 2009 Don Edmund became an apprentice to Baroness Juliana von Altenfeld, OL, OP. According to Baroness Juliana, “It was his intention, if he became a laurel, to become the ‘Offal Laurel’. This combined both his ambition, and his love of bad jokes.” She went on to describe how, despite his many other accomplishments, he often introduced himself as her cooking apprentice, he was that pleased to be learning something new.

East Kingdom Seneshal Mistress Mercedes Vera de Calafia echoed the sentiments shared by many hearts when she said “I wish I had sufficient words to express my sadness at the loss of Don Edmund the Lame. I’ve been fortunate enough to talk and laugh and fight with him. The world is just a little dimmer without his smile to light it.”

At Don Edmund’s request there will be a memorial service for him at this year’s Pennsic War. In addition a service is planned at Gulf Wars to accommodate the many friends who cannot attend Pennsic. Dates and times for these memorials are still being determined.

Edited to correct inaccurate information. The original article incorrectly referred to An Tir as a Principality and had the date of Don Edmund’s passing incorrectly as January 4th.

Those wishing to express their condolences directly to Don Edmund’s family may contact Baroness Juliana who will put you in touch with them.