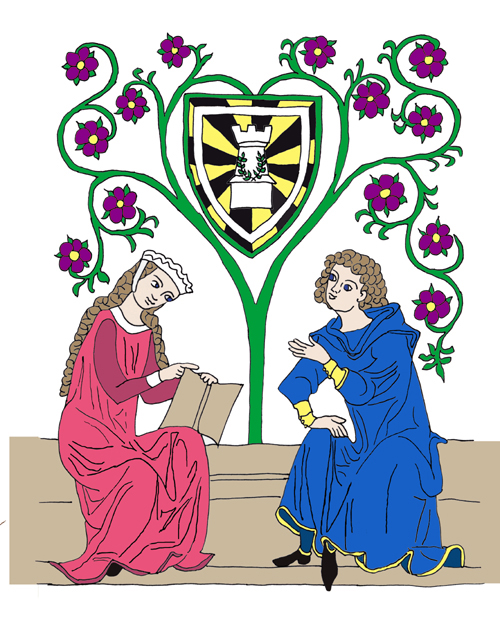 Blowing snow and the threat of a blizzard could not keep the ardorous inhabitants of the Barony of Endewearde from their annual winter gathering to celebrate love in all its many expressions.

The Tourney of Love was held this past Saturday February 16th in the Barony of Endewearde. It is a day filled with fighting, fencing, arts, music, food and fun.  At stake is the coveted pink baldric of the “Champeen o’ Love”.  Only the most ardent and versatile gentle earns the baldric since the right to wear the baldric comes from the entrant’s combined scores in all three of the day’s competitions: Fencing, Arts & Sciences, and Heavy List combat. Lord Ané du Vey has held the esteemed title of Champeen o’ Love for three years running and this year only one contender had the fortitude and versatility to enter all three categories and thus challenge him for the right to wear the pink and lace confection that signifies his status. Read on to find out if Lord Ané kept the coveted baldric or was forced (?) to surrender the magnificent regalia.

Lord Ané made a spectacular entrance to start the day off entering from the high dais of the tournament hall on a cloud and to the sound of trumpets and the gentle harp music of Baroness Aneleda Falconbridge, he welcomed all comers to this day in celebration of that noblest of emotions, and especially noted Master Julien de Lapointe who was the other intrepid combatant entered in all three contests of the day.

The first event of the day was the Fencing tournament in which 21 were entered.  When all the tallies had been tallied, there was a three-way tie for first place between Master Julien de LaPointe, Lord Radbod, and Don Jordan Harvey. The tie was resolved, at sword point of course, in favor of Don Jordan Harvey.

A short break in the martial activities gave those gentles offering performances as their entries in the Arts and Sciences competition to present their art. Then the populace was issued tokens with which recognize those artisans on display.  They did not have an easy time of it as there were 31 entries ranging across a broad spectrum of arts. The artisan with the most tokens at the end of the day would win the A&S portion of the day.

Then the Heavy List fighters took the field.  Eight entrants fought a round-robin and when the dust had settled, the undefeated champion of the heavy list tournament was Lord Ané du Vey.

Throughout the day a fabulous dayboard was presented by Lady Anya Krasnoperkin and her staff, keeping the gallery and the combatants well fortified for their exertions.

Once the last sword thrust had been delivered and the last A&S token tallied, it was time to announce the winners of the day. As has already been stated, Don Jordan Harvey won the fencing tournament and in recognition of this feat, he was presented with a handmade leather flask finely crafted and donated by Syr Cedric of Thanet. Lord Ané du Vey, winner the heavy list tournament was awarded a mighty drinking vessel “for water” which was made and donated by Anna Tarr.  The Arts & Sciences competition was won by Triggvy for his performance of the battle march of Tir Mara and he was presented with a beautiful stained glass fleur-de-lis donated by Lord Gwillim Kynith. Triggvy also won the Youth category of the Arts & Sciences competition with his performance.

Then it was time to announce the overall winner of the tournament.  The winner was presented not only with the traditional baldric, but also a hot pink great sword crafted by Lord Drottin Broddr Tryggrsson which is nearly as long as the event’s Autocrat Lady Agatha Wanderer is tall. Dubbed the “shaft of love” the prize was bestowed with much giggling and ceremony upon a new Champeen o’ Love: Master Julien de Lapointe.

Following the presentation of prizes the hall was reset for banqueting and an amazing feast was presented by Lady Leofwenn of Wytleseie and her staff. Throughout dinner there was dancing lead by Lord Gwillim Kynith as well as several musical performances. It was a perfect end to a love-filled day of friendly competition in celebration of that most sublime emotion.

Vivat to the beautiful Barony of Endewearde on hosting such a warm and welcoming event to brighten these cold winter days.