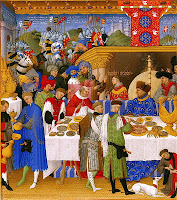 The Barony of Carolingia will host the King and Queen’s Bardic Championship at The Queen’s Meadhall event to be held at The German Club in Walpole, MA on February 2, 2013.  The day will be filled with drinking, dancing, storytelling, song, friends and good food.

The German Club is a welcoming place with a well stocked bar where you can catch up with old friends.  Those who attended Carolingia’s 40th Anniversary event or Investiture may remember the Club for its selection of beers.  The German Club remembers the SCA because of our affection for the dark brews.

The day will start with the competition.  After the competition will be court and a Roman feast prepared by Baroness Aurelia Rufinia.  To delight the Queen, dancing will follow.  Throughout the day, there will be room for socializing apart from the competition.

More information about the competition and reservations to come.